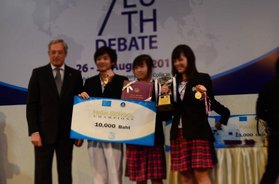 The underlining principle that the Anglo Debate Society upholds is to encourage, foster, and participate in time-honored traditions of debate and public speaking. These are, at their most fundamental levels, an open and structured exchange of values and ideas. Our Debate society was built on the fundamental ideas of promoting the legitimacy of freedom of expression, developing analytical skills, and building the confidence of our students.