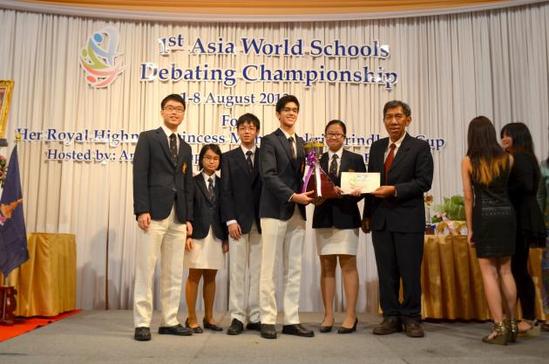 OVER 200 students from nine territories came to Thailand to participate in an international debate tournament early this month.Held under the theme of "It's Our Turn", the first Asia World Schools Debating Championship ran from August 1-7 at the Anglo-Singapore International School in Bangkok. All debates were in English, the second language of many participants from countries like Thailand, China and South Korea.

Seven preliminary rounds were held for both prepared and impromptu motions. The teams competed in the knock-out debates, which saw Singapore and South Africa duelling in the grand finals on the motion: "This house supports an independent state for the Rohingya".

Members from both teams presented constructive arguments opposing and proposing the creation of a Rohingya autonomous state, touching on the subjects of persecution, the right to self-determination, sectarian conflict and economic repercussions.

Keana Reinu, an adjudicator from Malaysia, said the winning team was very strategic and well prepared.

"They clearly demonstrated that they did their research and were organised. The topic is a global issue and it tested teams on such a diverse aspect," she said.

Julie Sutanto, director of schools at Anglo-Singapore International School, said debating was a major tool for communication and discussion in both the local and international arenas.

"We want youths to learn the importance of effective communication in various situations and to demonstrate that differences can be resolved through tolerance and understanding.

"Through debate, students learn to discuss global issues and create a public dialogue in an organised way," she said.

"Students also benefit from honing their research skills and gaining confidence from the experience of public speaking."

Natthicha Wiriyatomphan, a 17-year-old student from Triam Udom Suksa School, said the international tournaments had given her exposure to various debating styles.

Geetha Creffield, an adjudicator from Singapore, described debating as part of a core 21st century skill and pointed out that Singapore's Education Ministry fully supported debating among students.

"Debating is the ability to structure arguments with relevance to analysis. It is about manipulating language to persuade rather than to create conflict. If you learn debating than you are producing for yourself the mindset that you can reconcile with others while you are clashing on the floor. So you have two skills - you present and you also listen," he said.

The next Asia World Schools Debating Championship will be held in Bangkok at the same time next year.